And why do people need help getting to the car? you managed to shlepp those same groceries all through the store, and to the till but suddenly now you can’t push the cart [parents with small children are excluded from this rant]

But parents with small children you are not excluded from the next rant – control your kids. They do not need miniature shopping carts. They do not need to ‘help’ so they won’t act out. I neither helped my mother with the groceries nor did I have a small cart of my own to push, and I don’t recall ever EVER screaming like a banshee or crying hysterically in the grocery store or GOD HELP ME when we got home. [except for that time mum says I tried to filch a candy bar, but I was like 4 years old] [also mum, if I WAS a bad-ass in the supermarket, now is NOT the time to post it on my blog] [also, I’m not sure what would have happened if I had been bad. I was too afraid to find out. The not knowing was a terrific motivator].

Every deli needs a number system. or else we’re all standing around trying to figure out who is next.

I don’t need that many mustards to choose from. Thanks.

I don’t want to sample anything at the grocery store. Having worked at a grocery store as a cashier many moons ago, they are dirty and most stuff is getting touched by people. Except for the deli were stuff is behind glass. Plus, I did’nt go to the store to eat, I came to shop. Eating comes later when I get home.

Just because you see chips and cookies and pop and pastries in my cart, don’t you judge me! Sniff.

Random things on my mind…..
1. My commute is killing me. Sometimes I’m not even sure how I got to work.
2. Why is the new puppy, Lola, stinky? My other dogs don’t smell.
3. What if my other dogs do smell but I am immune to it now?
4. What if I smell like dogs?
5. Where does the money go?
6. I really should put away my laundry instead of living out of the laundry basket.
7. I don’t know why it took me so long to move that shelf in the fridge. TONS more space now!
8. I really like it when my toes are professionally polished and should have it done more often.
9. 7.30 on Sunday night feels a lot later than 7.30 on a weeknight.
10. Need to prep coffee pot for tomorrow morning.

And my degree is not in basket weaving or acrylic paints. It’s in something smarty mcsmarty pants – Math. So I’m not a slouch in the brains department. So WHY is it so hard to change my headlights?

I went out into the garage at 5 o’clock. I had 2 burned out headlights and one burned out signal light. [oh shut up, like you’re so perfect. So the left headlight has been dodgy for WEEKS but I thought it was part of my overall electrical problem. and when the left turn signal went, I thought, well hell, the lights on the left side of the car have always been dodgy and did I really need that turn signal? I would get around to it. But then my right headlight went. And I live in Calgary and it gets dark at, like, 4:30, so unless I wanted to leave for work at 9 and then leave for home at 3, I had to change them.]

I had to come back inside to get my socket wrench set. yes, I have one and it’s beautiful. I inherited it from Dad. Actually, I inherited all my tools except for my new screwdriver, which is also beautiful. My socket set has all the socket sizes you will ever need. Two wrenches and adapters. but it’s not organized because I got it from Dad. And he was not the most organized with his tools. I also got two tool boxes from him and I keep meaning to get around to organizing them, but I guess I inherited more from him than just his nose.

So, long story longer, AN HOUR LATER I’ve finally changed the headlights. I had to remove 4 bolts from each side, and then turn the light “one sixth of a turn counter clockwise.” No Joke. one sixth. and then I had to shimmy it and jiggle it until the light sprung free and then PRY it off the clip and then jam the new one on and my hands aren’t strong enough to snap it into place so I had to put gloves on so I could brace the lamp against the car and push down really hard.

I also need to replace the windsheild wipers but I’ve saving that until I get all the car grease out from underneath my gel nails.

And my story doesn’t even compare to the time my bro in law came over to help Jenge change her headlamp. I told Jenge she could do it, but little did I know that her cars design requires you to REMOVE PART OF THE ENGINE to get to the headlight. Luckily my bro in law has the tools and the knowledge to do this, but the simple act of changing a headlight took him 3 hours and left a scar on his hand.

My million dollar idea is to put the headlights in an assembly that doesn’t bolt shut. It locks. And it takes the SAME key that starts your engine. So when you need to change any of your lights, you simply pop your hood, or trunk, turn your car key in the assembly and it pops open and then you pull the burned out bulb out [which has turned black so you know it’s for sure burned out and not just loose] and you snap the new one back in and then hit the handy “Test” button that the manufacturers have also installed so you don’t have to jam the light in, hope it’s attached, jog to the driver door get in and start the car to see if your new lights work.

Next car repair, the aforementioned windsheild wipers. I can’t see out the passenger side, which really doesn’t bother me all that much. but now, I can barely see out the drivers side. I’ll keep you posted.

Even if you know me, and have known me for years, I doubt if you know my natural hair color. I’ve been dying my hair since I was 14. At first it was because I wanted it more red, more brown, more something. Now I also have the added need of covering the damn grey. Which started showing up at 16. True Story.

I can only recognize my natural hair color by its blandness. I refer to it as Dirty Dishwater Brown. It’s the color your sink water gets after a large load of hand washed dishes.

Ash and I spend a lot of time talking about writing. We spend more time talking about writing than we spend writing. Are writers by nature narcissistic?
We definately appear to be self proclaimed martyrs. All the writers I know talk about how hard it is, how they have to make themselves sit down and do it, how most days it’s like blood from a stone.
But, we keep doing it. I feel like I get a payoff from it, but I’m not quite sure what it is. I’m like a junkie except I rarely get the high and often bitch and moan my way through one paragraph after another.

But there is something to be said for how exciting it is when a story finally comes together. Now if only I could finish the book!

Hey all!
Just thought I’d let you know about an even that my sister Ann is putting on and that I am attending.

It’s the MARCH MADNESS CROP taking place in Calgary. Click on the link for full deets. Here’s the shorthand:

And, as is so important to let most scrappers know, there will be FOOD. And FREE STUFF.

I’ll leave a link on the side in case you are interested but can’t commit just yet. 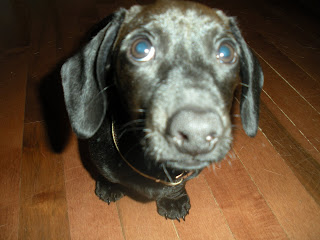 Hi there! I’m new! I’m pretty sure my name is either Lola, or Lola-Leave-It! It’s hard to tell cuz I hear both of them a lot. My name might also be GO POTTY as I hear that A LOT too but I only hear that when I get turfed outside. and it doesn’t matter how much you cry or how much you shiver, you have to potty outside. I’m pretty good at it so far and have only had a few accidents. I’m not sure what that means but that’s what my new mums, Mummy Jennifer and Mummy Margarita, have said.

I like Portia. I love Rocky. But both of them get up and leave when I get close. I don’t know why. I just want to be friends. Everyone is super friendly at dinner time though. Both mummies stand around me while I eat and Portia and Rocky get super close to me then. I don’t know why, but the Mummies always chase them away! I would share my food if they asked! Sometimes when I see Portia, I just roll onto my back and show her my belly. It’s a pretty nice belly!

i like to sleep. but I don’t like to be alone. I’m always looking for a lap to crawl into. Today, Mummy Jennifer put me in my crate when she went out and Mummy Margarita had gone upstairs for a nap. I CRIED AND CRIED AND CRIED. Why would I want to be alone when I KNOW there is a human around? and Rocky and Portia don’t even care when I cry! they just keep sleeping. I don’t know how they can sleep through all the noise. Mummy Margarita said it’s enough to “wake the dead.” Well, I had to make sure she heard me! I’m so little! and lonely! and I really, really, really needed a lap to sleep in.

So it’s pretty good here so far! I’ve gone on some walks but it gets really cold outside and my belly drags on the snow. Mummy says I’m Low To the Ground. I have some sweaters but I really need a belly cosy. My mum said she’d make one for me.

Being out of Debt = Makes me happy.

Therefore: Shopping = Being out of Debt.