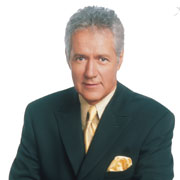 The Answer is, of course, What is the Sula-wahi-wahi-wantinkah tribe of Ancient Persia?

Don’t you feel like Alex Trebek is faking it?

C’mon. You know how I feel. You feel the same way. He’s not any smarter than us and definately isn’t better looking. Yet everytime one of those gigantic braniacs on Jeopardy get the answer wrong, don’t you think you catch him smirking as he reads the answer, oh, scuze me, the question?

As if he would even get past the first round on Jeopardy. As if he has the tanakas to bet it all and let it ride in the daily double.

Don’t you think he should at least joke about it once in a while? Say the question was: It is the state that grows two thirds of the worlds eggplant.

And when he reads the question he could say something like:
“The correct response is “What is New Jersey?”. Wow, good old New Jersey. Who knew?”

And then he shaved his moustache too. What was that all about? And why didn’t we mind as much as when Tom Selleck did it?