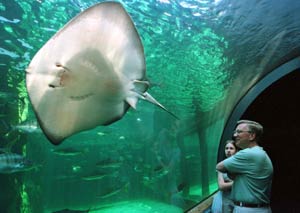 When you just don’t get it.

So my mum told me that people have been killing stingrays to ‘avenge’ the death of beloved Crocodile Hunter Steve Irwin, himself killed by a stingray.

As my mum said, wasn’t this exactly what he spent his whole life championing against? Wasn ‘t it his mission to save as many animals as possible? To teach us about these creatures in the hopes that we would work to preserve all life?

So I think there are two things people aren’t getting here: 1. In trying to pay some kind of weird tribute to this man, you are going against the very things he was trying to teach us.
2. It’s not possible to take ‘revenge’ out on animals. The stingray that killed Steve Irwin is not going to feel really bad now that you’ve gone out and killed a bunch of its brethern. The stingray does not feel remorse for what it has done. The stingray did not kill Mr. Irwin out of malice or jealously or anger. Animals kill for one reason: to survive. Either by eating what they kill for food, or killing something that was trying to kill it.

So what are these people trying to prove? Do they feel better for killing another member of the stingray family? Most likely a stingray who was minding his/her own business, swimming in the ocean, looking for some lunch? Do these people call up their friends now and say, Crikey mate! I killed a stingray for Steve Irwin! and then their friends ooh and ahh over this? I don’t get them, and I don’t think they are getting the point.

Read an article on this here