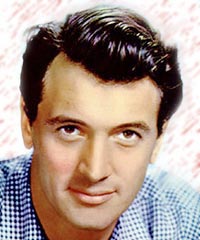 Man’s man, ladies man, man about the town, yes, it’s Rock Hudson. He was the studliest dudley Hollywood had seen in quite a while. I still watch Pillow Talk and Magnificent Obsession on a regular basis. Sigh, Rock Hudson, you dream boat.

But, unbeknownst to us at the time, he was gay. Sadly back in those days, you had to hide your sexual preference if it was not for the opposite sex. But they say, times have changed. . .. .