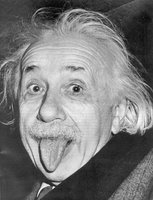 Yes, Einstein really did have his finger on the pulse of the world. It’s all about relativity. Case in point: to my best friend Donna, I am an uber geek. I love Sci-Fi, read math books for fun, and actually have a comic book collection. On Donna’s geek-scale, I am a 9.5. The 0.5 being the room needed for spontaneous geek stuff I do that she just does not have the capacity to imagine.

However, being a proud card-carrying member of the geek club, I know that my geekdom is actually pretty low on the geek-o-meter. I’ve been to Star Trek Conventions, and let me tell you, I’m only about a 5 or a 6 in comparison. I don’t have a action figure (aka Doll) collection, I don’t have Star Trek posters plastering my room (okay, okay, I used to but not anymore), and I actually get out into the real world and am quite social when needs be (although I would prefer to stay at home and watch re-runs of Stargate).

But I am proud of my geekiness and wear it like a badge of honor. Geeks are the most open minded people I know. They are always willing to let their imagination run free to see where it will go. I would go so far as to say that geeks are the most optimistic, good natured people on the planet. We truly beleive that one day, we will be able to solve the world’s problems with science and we will finally be able to put all our differences aside and joing globally, and then universally (like the Star Trek Federation). It won’t matter what you look like or how you dress, we will all be the same, striving for a better world. Human curiousity will lead us to unimaginable places and things. Hopefully, it will be the geeks that make first contact. It’s the best chance of things going well. Honestly, if you were an alien, who would you rather meet? Enthusiastic, scientific, good-natured people with a love for technology or power hungry, war mongering, suspicious politicians?

Lead on Geeks!! I am but a humble follower of your ways!!