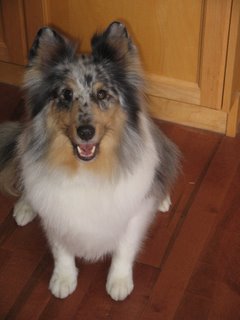 Get a real haircut and get a real job! Well, 1 outta 2 ain’t bad!
It’s been far to long since I have blogged about a dog, so I thought I would put up this picture of The Sock, who looks oh-so-snazzy after getting his hair done on Monday. Rocky’s hairdresser specializes in Shelties and is harder to get into than my own hairdresser, and costs about as much. But as you can see, it’s clearly worth it as he struts around for the whole week after a fur cut shaking his tail and bowing to you (contrary to popular believe, dogs are not always stretching when they put their two front paws out and bend down. In the dog world, this is also known as a bow or an invitation to play.)

For those of you looking for a Portia nose update, it’s still pink, but several people have informed me that they know of someone this has happened to so I should not be worried. We’re prolly gonna go back to the vet in a week or so to see what’s what.

BTW, she has been very snotty since Rocky got his haircut. She is quite jealous I think. 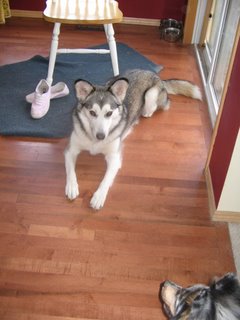