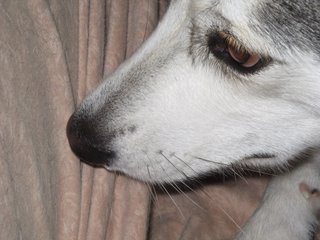 The nose knows (or Karma is a crazy bitch!)

Now I know that I was going on and on yesterday about how I luv pink, can’t get enough of it, fave colour etc etc. But there is one thing I don’t want to turn pink!

Yes, in a weird twise of events, Portia’s nose has been changing from black to pink (although you can’t really tell in the photo. She didn’t want to pose. Maybe she is sensitive about it??). At first I didn’t give it much thought, but then Jenge said, ‘I wonder why it does that?’

Well, heck! Now I’m wondering why it does that. So I went to the one place I go whenever I have a burning question that must be answered immediately!!
Google!
Turns out other people have had this problem as well. It could be a number of things:
1. Ceramic or plastic food bowls will sometimes cause this. Portia has stainless steel (nothing but the best for my baby!)
2. Lack of sunlight during winter can cause loss of pigmentation – It has been rather cloudy for Calgary.
3. An Auto-immune system disorder. (SOB!!)

So, of course, I am fixated on cause number 3. Portia is no stranger to being sick. When she was rescued by Arf she had the Parvo! Then once we had her, we found out she had worms, and then a parasite, and then. . . . wait for it. . . . puppy herpes (now there’s puppy herpes and human herpes and NEVER THE TWAIN SHALL MEET!! – My first question to my vet after ‘Is she going to be okay?’ was ‘whoa, can I get it?’ to which she emphatically responded NO). And she’s had several eye infections and some bladder trouble too. My vet says it’s part and parcel when you rescue a puppy, they’re prolly going to be sick for the first couple of years. And since she had the parvo, she has a weaker immune system than other dogs her age.

But then, her nose turned pink! And Jenge noticed one of her teeth was bleeding. My baby!!
So we’re off to the vet in T-minus 1.5 hrs. Portia luuuuuuuuuuuuvvvvvvvs the vet. And why wouldn’t she, we’re there often enough and they always tell you that you are a good dog, and then they feed you cookies. I however, generally get chewed out for something (You’re not strict enough, she’s too fat etc etc). Although I have to say, when the vet said that Portia was too fat (so fat that even her tail was fat) and that I had to put her on a diet, I was like, ‘Doc, don’t you think that’s a little kettle-ish of me?’ To which the vet gave me a blank look. I added, ‘You know, pot, kettle. . . ‘ and then I pointed to my slightly chumby belly. The vet kept staring at me blankly and then said, ‘Cuppa kibble in the morning, cuppa kibble at night. Two or three treats. THAT’S IT!!’

I asked Jengie once if she would put me on the Portia diet (Portia lost 12lbs!!) but Jenge said it wouldn’t work because I know how to open the fridge. Go figure.

But I digress!! I will keep you updated on my Portiacakes!!