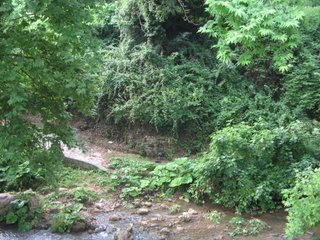 It’s Greek to Me!

My dad is greek. Moved to Canada in 1965 and the rest, as they say, is history. I know a smattering of greek (where’s the bathroom? I want some water. No, I don’t have a husband. . . . ) but I’ve always wanted to learn more. So my sister’s and I have signed up for a Greek course at the University of Calgary in Octobr (first available date). I’m pretty excited! I really worry that without the language I will end up losing touch with my dad’s family, as most of them speak no English, and those that do speak English only speak a little. Once I learn greek, I’ll finally be able to defend myself! What do I mean by that? Well, on my second last trip there, I finally met up with a ‘cousin’ of mine (in Greece anyone who is remotely related to you, or the offspring of a family friend is your cousin) who spoke English. And I asked him where it was that I had agreed to go with my family the next day. All I knew is someone asked me a question. I heard the word ‘go’ and the word ‘tomorrow’ and so I nodded.

Turns out I agreed to pick peaches for the whole day. Luckily my cousin translated for me and I got out of it.

I also get constantly harrassed about when I’m gonna find a husband. Used to be, I was considered an old maid and on the shelf, and had been since I was 20. But Big George (an actual cousin by blood) recently got married to a woman in her mid to late 30’s (Big George is around 50ish I think) and suddenly, there was hope for me apparently! I was no longer on the shelf! I could be dusted off and married! No problem according to them. They have shamelessly being trying to set Jenge up with everyone from the local breadmaker’s son to the tomato stand guy for eons and everytime I go they ask ‘where is your husband?’ When I tell them I don’t have one the get this look on their face. A cross between ‘Unbelievable!’ and ‘That’s so TRAGIC!’ I once tried to explain in my broken greek that I had a job, I had a house, I had a car, I didn’t need a husband. They said ‘What about kids?’ I said I had dogs.

Don’t even get me started on the reaction to that. These are country people. The fact that my dogs live in the house with me and don’t actually ‘work’ for their keep is just as mind blowing as the fact that I am not desperately in need of a husband.

So, it’s off to Greek School. I gotta say, I love to learn languages! I think I might download a ‘How to speak German’ book tape to my ipod!

Until then, Yasou! (greek for goodbye!) By the way, the picture is the view from my Aunt’s house in Greece, where my dad grew up.