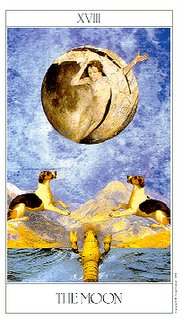 What is it about the human condition that makes most of us closet paranormal junkies? You know what I’m talkin’ about. You secretly read your horoscope in the magazines you buy, telling yourself that you don’t really believe it but always finding something in your life to match it up to. Even though most of us would scoff at superstition if our friends asked us, we still chalk up unlucky events to the fact that it’s Friday the 13th, or ponder our seven years bad luck when we accidentally break a mirror.

Jenge went to the psychic this weekend and I must admit, I was dying to know what she was told. She came home and regaled me with stories about all the stuff the psychic knew. And sure, some of it could just be good guessing, but how did that woman know that of Jenge’s two sisters, one took after the Greek side like her (Ann) and one was more fair, like mum’s side (me)? Or that I’m a writer, but I keep most of my stuff hidden away. Or that Ann is crafty? It makes ya wonder. . . .

And I’m totally a paranormal/psychic junkie! Most of the fiction I read has some sort of woo-woo (that’s the scientific term for freakishly paranormal stuff) in it. The stories I write are choc full of crazy paranormal stuff. I always read my horoscope even though I know that due to the drift of the stars over time, the zodiac is a couple of signs off. I’m fascinated by Mayan culture and prophecies, I’ve watched more than one special on Nostradamus and Edgar Cayce. Although, I do pepper my superstitious beliefs with handy dandy factual evidence. I know alot of superstitious grew out of perfectly logical roots. A way for our ancestors to explain things that they did not have the tools to yet explain. And alot of it was, ahem, fostered by the Catholic Church as a way of driving out paganism – making formerly paganistic icons and rituals bad luck or bad omens.

So, is our lack of understanding about the paranormal mojo simply that we have not advanced enough in our science to comprehend it? And if so, why are so many people so ready to dismiss it or scoff at it? Why, when you tell someone about a dream you had that then came true, they are so ready to burst your psychic bubble? But when hockey players wear the same socks for the entire playoff series and don’t shave, these are reasonable actions? Why are so many people ready to shut our woo-woo/mojo door? What are you afraid of? I don’t have a clue about quantam physics or string theory other than a vague understanding of the principles but I don’t dismiss it as junk. So if you don’t know frak all about palmistry or tarot cards or iridology, why are you ignoring it? Gravity worked for a long time before Newton wrote about it, and E=mc2 ages before Einstein figured it out. So who’s to say that the same won’t apply to the woo-woo?