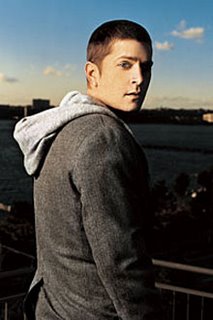 Rob Thomas, you rock my world!

Donna and I went to Rob Thomas tonight and it was AWESOME! Thanks to Donna getting pre-notification for tix (because she goes to all those Motley Crue concerts) we had awesome seats, 9th row from the front. We could see the whites of his eyes!

It was a great show. His opening act was Anna Nalick (whose music is available at iTunes) and she was really good. She had a great voice and her music was fabulous and she had on the cutest pair of shoes I have ever seen. You totally need to download her album from iTunes, ‘Wreck of the Day.’

And then it was on to Mr. Rob Thomas. He has an amazing voice and it’s even better in person than it is on his records. He did alot from his new album, ‘Something to Be’ and some of his Matchbox Twenty stuff, and even a cover of David Bowie’s ‘Let’s Dance’ which totally made me get up outta my seat and shake my bootie, and I’m rather shy about my bootie shaking so you KNOW it was good if I got up and got my groove on. His band was super! And the lights were so great! It was such a good show, totally worth any price. I normally think concerts are a great idea until I get there and it’s too loud and there’s so many people (They don’t call me squirrelly girly for nothin’) but I hardly noticed because it was such a terrific show.

I’m running out of adjectives to tell you how much I loved it! Great music, great sound – you could actually make out the lyrics unlike some other concerts where all you hear is ‘Whanh whanh whanh – drum solo – whanh whanh whanh.’ And my ears are hardly ringing, which is a first for me.

So, Rob Thomas, if you’re out there in cyberspace and you happen upon my blog, your show was simply marvy!! THANKS!!