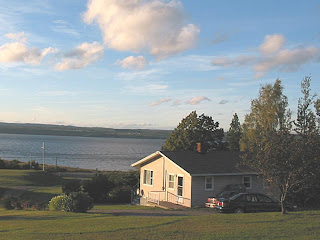 Uncle Carmie died the same year as my dad. Carmie died in June, after Mary in May, but before Dad, in August. And sometimes I feel like Carmie’s death was eclipsed by Dad’s. Carmie lived in Cape Breton, and the photo above is a picture of his bungalow. I remember trips there as a kid, and we would go swimming in the lake. I was terrified of Jelly Fish. There are train tracks close by and we would put pennies on them and then hunt them down after the train had squished them.

The last time I went there, before I went for the funeral in 2006, I was 13. And surly. And in a bad mood. All summer. I was away from my friends for the summer, and not happy about it. I would glower at people when they tried to be nice to me. And Carmie would try hard not to laugh and say “Ah, the look.” And I was mad, so mad that he wasn’t affected by my obviously surly gaze! In fact, he seemed to find it really funny!

Looking back now, I laugh at my younger self. And I think that I’m pretty lucky my Uncle was amused by it instead of being hurt, or annoyed.

Mum and I had been planning a trip to Cape Breton for the fall of 2006. I was finally going to see the fall colors of east. And then Carmie died, so we went in June. And I was really, really mad at myself for not having gone back sooner. A classic case of waiting too long, thinking you have more time, etc etc. You know? I was really sad I didn’t get to see Carmie. Sit on his enclosed porch and just hang out.