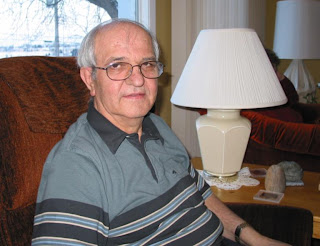 After Dad passed away, one of Jenge’s friends got us a Hope for Humanity bush. I planted it smack dab in the middle of my garden in the back yard. It had beautiful, bright red roses. The next year, I was worried it wouldn’t come back, but it did. It got so big that I thought it might take over my whole garden. But this year…. well, I nervously watched it all spring. Nothing. I went out and started clipping branches. Dead. Dead and dry. No hope. But unlike the other rose bushes that didn’t make it, I didn’t have the heart to pull it out. I yanked the other rose bush, but I couldn’t bring myself to pull out the Dad Plant. Everytime I would go out and weed my garden, I would trim a few more branches and hope that one of them wouldn’t be dry and dead. but there was nothing…..

And then a few weeks ago, I saw it. Growing out from underneath the dead branches was green! I tried not to be hopeful. Surely, after all spring, all summer of nothing, it wasn’t going to start up again in late August for crying out loud. It was probably just weeds. So I watched it. Secretly from the window. Out of the corner of my eye when I went to the garden. I didn’t even touch the new green.

Finally I took a close look. It was back! All the dead branches were still dead, but this was brand new growth, from the roots, I guess. I actually touched the leaves. And I told Jenge, “The Dad plant is back!”

And she said, “Hey! Remember what the psychic told me?” I said, No, cuz frankly, I didn’t. She saw the psychic almost two years ago – right after Dad died. Jenge continued….

“The psychic told me there was gonna be a plant or flower that represents your dad and you’ll think it will have died, but in the fall, it will bloom again, and that will be a message from your dad that he’s okay.”