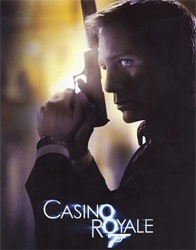 If God Made one, Why didn’t He make enough for everybody?
Went to see the new James Bond film, Casino Royale, this weekend with my mum. It was great! Haven’t stopped talking about it since. Ashleigh (who saw it this weekend too) and I were raving about it via messenger as well. Daniel Craig was hands down the best Bond ever, and if you know me, you know I have been championing Timothy Dalton for years, so for me to boot him off the pedastal in one fell swoop says alot.
And as a side note to all you other action films out there, I can’t recall hearing the F-word once (or perhaps I just missed it but I doubt it). No one got totally naked either (although I think everybody was wishing that Craig would!).
For those of you not in the Bond know, Casino Royale was actually the first ever Bond film made and David Niven (if you just said ‘Who?’ you don’t know your Hollywood) played the first James Bond, not Sean Connery. I believe it was also another studio that made it other than MGM (who I think is the traditional Bond studio) and that’s why it took so long to remake, they had to wait for the rights to come up. Well, it was well worth the wait. Fantastic! Two thumbs up! On the longish side, so don’t drink a big coke or you’ll be sorry!